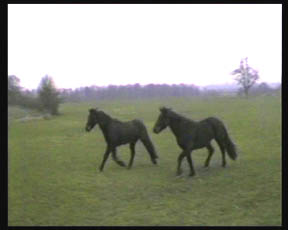 ‘The Wild Horses of Newbury’ was shot very early on a single morning in February 1997. The whole episode only lasted a few minutes.. nothing was staged. The bypass security guards and police had circled two very old Oak trees and were preparing to chop them down, when two scruffy, seemingly wild horses appeared and began to interfere with the felling.  One of the horses even confronted one of the police horses….. It was a very magical moment.

For more info and to contact the film maker go to;
http://www.mokshaproductions.com/wild_horses_of_newbury.htm