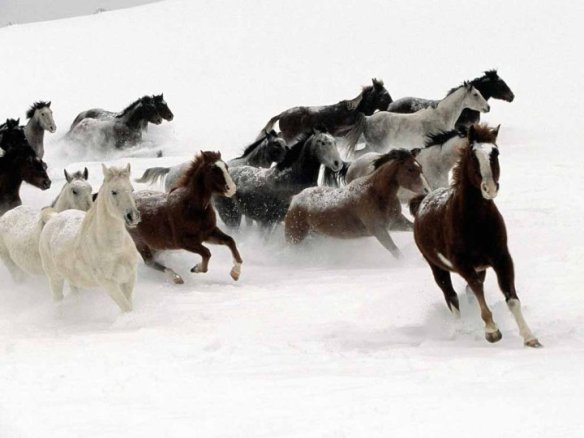 The Hoofprints of the Horses

“Wherever man has left his footprints in the long ascent from barbarism to civilization, we will find the hoofprint of a horse beside it.” – J. T. Moore

The Horse Nation and Humankind have been partners in the growth of civilization and human development since the dawn of time. The survival and destiny of the two species has been inextricably intertwined throughout the millennia, both witness and participant in nearly every important event in the evolution of human history. Horse and Human have stood shoulder to shoulder for thousands of years, involved together in all of the conquests, explorations, expansions, and settlements that have shaped and built our world. More accurately, humankind has ridden the back of this strong, durable, loyal partner through countless wars, migrations, and developments, resting comfortably atop, or in a wagon, or a carriage behind this magnificent ally, always confident and reassured in the knowledge that the incredible strength, loyalty and enduring spirit of our horse brethren would win the day!

The eternal bond between human and horse has been forged by the white heat of the battlefields of Alexander the Great and Napolean Bonaparte’, and sculpted by the cool winds of Asia as the hordes of Ghengis Khan flew across the vast plains of Mongolia, horse and warrior as one. It was a “divine” relationship as the huge, noble Draft horses of the Crusades, carried the knights of Christian Europe into their “holy war” against the Muslim warriors of the East. The Muslims armies arose in defense of their holy land and faith and rode to victory on the backs of their quick and agile Arabians, running deadly circles around the armour laden invading Christian forces and saving the day for the followers of Allah. In Biblical times, as the Roman Empire expanded through out the world, Equine and Human gazed through the same eyes, tortured witnesse to the crucifiction of Christ.

The bond between Human and Horse has been nourished throughout the centuries, as countless societies and civilizations survived and flourished from the food harvested from generations of horses toiling, without complaint, for endless hours plowing and cultivating the fields that sustained life for humans all over our world. Horse and Pilgrim shared in the labors of love, cooperation, productivity, goodwill and unity that symbolize our celebration of Thanksgiving. A family, partners in peaceful harmony. Horses tirelessly pulled the wagons of generations of pioneers in America and the world, transporting restless, relentless armies of settlers through harsh, unforgivable terrain, impassable rivers, dry and deadly deserts, frozen snow covered mountains and unimaginable hardship. There is no “Westward Ho!” without the dedication and drive, cooperation and courage of the Horse. There would be no America, and no expansion and settlement of the human race almost anywhere on earth without the service and sacrifice of the Horse Nation!

Ironically, the bond between Human and Horse reached its most spiritual level in direct opposition to this same American expansion, as “the world’s greatest light cavalry”, the Plains Indian, rose up in desperate resistance to the encroachment and exploitation of their sacred land and natural way of life. They defended a way of living that had at its core and foundation, the vision of the Horse as a “spritual brother and sister”, one with its warrior and hunting rider through out the Native American life and afterlife. In this culture, the Horse was held in great respect and reverance, awarded its true position as a respected , essential equal, another nation to be cherished, protected, valued, and revered in a societal, spritual relationship that transcended all others. The “riders of the plains” understood the spiritual, collaborative connection among Human, Horse and “God”.

As we jouney through the new millenium, the human species struggles to face the critical challenges of an ever demanding, dangerous, disconnected , often graceless and exceedingly less spiritual world. In such a world, we would do well to remember our link to our soul and spirituality, our heritage and history, with and through the Horse. We would do well to recognize our partnership and debt to the Equine species. If we search our genetic memory, imprinted indelibly over thousands of years, we will be reminded, from the core of our hearts and spirit, of all of the strength, beauty and grace that exists in our world through and because of the magnificence of the horse.

We will be reminded of our journey through time and history together, and the quality of loyalty and love that the horse willingly brings to us through the mellenia. When we gaze into the gentle eyes of our Equine brethren, we feel the flow of energy that courses through us in a core connection to the many nations of sentient beings on this earth. In those soft pools of mystic intellect, interconnection and empathy, we begin to cross over the spiritual bridge than spans the vast void of ignorance and apathy, leading us on the pristene path to embracing all creatures and peoples sharing our world, “one with” all species as a collective , connected, empowered life force!

God’s greatest creation  is one of nobility and greatness, trust, and gentleness.  When God created the horse, he said to the magnificent creature: I have made thee as no other. All the treasures of the earth shall lie between thy eyes. Thou shalt cast thy enemies between thy hooves, but thou shalt carry my friends upon thy back. Thy saddle shall be the seat of prayers to me. And thou fly without any wings, and conquer without any sword. ~ The Koran